In love, we always hear people say that age does not matter. However, when a couple who has an incredible age gap, or are not in the s... 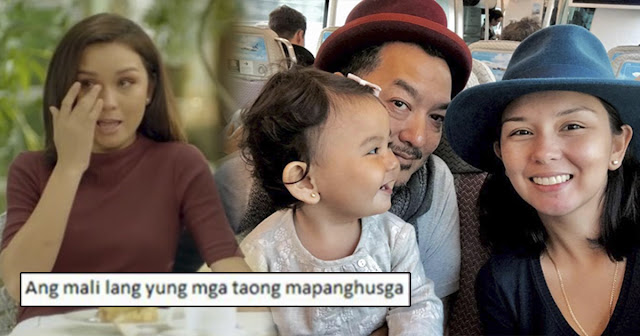 In love, we always hear people say that age does not matter. However, when a couple who has an incredible age gap, or are not in the same traditional sense, then people always have something to say. After all, people will always have comments.

This is what couple Beauty Gonzalez and her husband, art curator, Norman Crisologo learned to accept and laugh about.


Last 2015, in the middle of a show "Ningning" from ABS-CBN, Beauty Gonzalez had to leave. Rumors started spreading about her weight gain and that she was pregnant. She revealed her pregnancy and eventually her marriage to her non-showbiz boyfriend, Norman Crisologo.

Norman is 15 years older than Beauty. In a toothpaste commercial, they revealed fun stuff about their past struggles.


“I had to kiss a lot of frogs before I got my king. Not a prince. I wanted a king,”


This is what Beauty said as she gushed for the love that she and Norman are sharing. However, like any other couples, the two has had their share of struggles and trials, especially that theirs is not the traditional love story that everyone is used to.

Learning to laugh about it


After posing for a men's magazine, Normal scoured his showbiz contacts until he found Beauty's number. At first, Beauty recalled that she thought that Norman was just a condominium salesman until he asked her for a date. And the rest, as they say, is history.


“One time we went to this camera shop in Makati. And then we were looking at this camera, and then the salesman was trying to sell it to us, so he was giving us a demo. So he was saying, ‘Oh ganito ho ma’am, ganito, ganyan. Eto. Teka, picture-an natin si daddy. Oh, daddy! Daddy! Smile, daddy!’ They were looking at me, so smile naman ako, syempre wala akong magawa. But, you know, we just had a good laugh,”


At the end of the day, what is important for the couple is that they still love each other.


“We were just open about it. And siguro if we hid, tinatago natin, If we acted guilty then maybe it was an issue for everyone. ‘Pag guilty ka talaga lagot ka eh."


“But syempre haters are haters. And there’s always gonna be someone who makes comments,”