Jessa Zaragosa claps back at the two women who kept maligning her daughter Jayda. 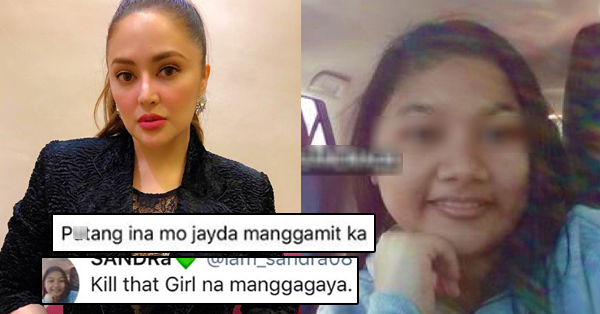 If you've lived in the Philippines long enough, you probably know by now that local fandoms can get a little too intense at times. Some real-life couples can't enjoy a peaceful relationship because they always receive the ire of on-screen love team fans. Remember Arjo and Maine? Do you still remember the extreme criticism their relationship gets from AlDub fans?

Well, the netizens have claimed a new least favorite, and that's Jayda Avanzado-- the gorgeous daughter of Jessa Zaragosa and Dingdong Avanzado. The softspoken, gracious girl has been targeted by Bailona fans. 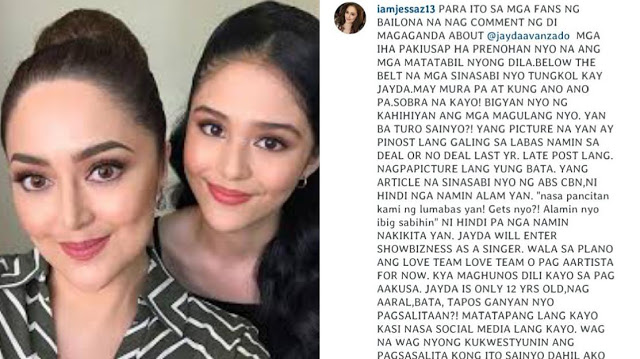 A few comparisons and pitting Jayda against Ylona Garcia would probably be forgivable, but netizens really reached a new low with this one. Can you imagine that they would actually message Jayda directly just to say vile things to her? Even in their public tweets and Instagram comments, these ladies would lash out, wishing for Jayda to meet her end and even using b4d words to take her down.

We all know that Jessa is usually so reserved and quiet, and would hardly ever respond to criticisms against herself. But when the criticisms reached her beloved only daughter, she could not help but hit back at the naysayers.

As a mother, it really must be hard to read those words said about your daughter. One can't really blame Jessa for slamming them back, especially since they went below to belt when they wished ill upon someone who is just doing her job.

It's impressive though how Jayda herself has been handling everything so gracefully. She has remained silent through all this, but no one really knows how much and how difficult it is for her in private.

May we always get reminded that celebrities are people, too. They have feelings, they have senses. When we say hurtful things, we put them in a difficult situation, along with their relatives.